REM and EMDR: Are Eye Movements Necessary in EMDR? 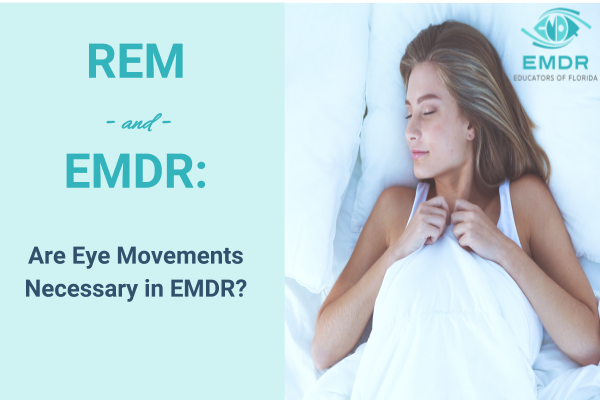 To what should we attribute the remarkable effectiveness of EMDR over other approaches to treating PTSD and other trauma? Can the eye movements be left out? Absolutely not. Some early studies found eye movements are not needed. These early studies were flawed in that they employed insufficient treatment doses, inappropriate populations, and lack of statistical power. Some of the studies found to be defective are: Boudewyns & Hyer, 1996; Devily, Spence & Rapee, 1998; Pitmanet. Al, 1996. These studies contributed to this confusion that still lingers today.

Over 30 robust randomized controlled studies show the power and need for the eye movements since EMDR’s first study.

The advantage of EMDR is not the eye movements alone. Neither is it solely in getting the client to recall traumatic memories. Nor are the benefits only a result of the verbal guidance, the protocols of the treatment. All these elements work together. The EMDR protocol asks questions that prime the entire brain for activation. The cortex, limbic system and cerebellum/medulla all become activated. The eye movement and their activating effect is one of the primary differences between EMDR and other therapies. With most therapies, the counselor and client talk about experiences. EMDR activates thoughts, feelings, images, memories and body sensation so the clients have an experience.

At the heart of the better result from EMDR when compared to other exposure therapy for PTSD is enhanced information processing. Every human mind process information at the subconscious level naturally when they sleep. Traumatic memory overwhelms REM. REM cannot handle the trauma; therefore, symptoms begin, and flashbacks occur because the information is store maladaptively in the brain. EMDR continues where REM left off. In short, EMDR is like REM on steroids.

REM emotional memory processing is a way the brain functions; part of its design. When a person is REM sleep deprived, there’s a greater chance he or she won’t remember information taught to them immediately before their REM-less sleep. In fact, Robert Stickgold, Harvard sleep researcher and the man who made the connection between EMDR and REM has stated that he thinks, post-traumatic stress disorder (PTSD) should be called post-traumatic sleep disorder. Stickgold, believes sleep is essential to mental health and physical health, without adequate sleep, REM breaks down. When REM breaks down pathology can begin.

Certain parts of the brain activate during REM. Brain scans show different patterns of brain activity during REM. For example, there is a rhythmic activity (similar to EMDR’s rhythmic eye movements) one representing a dynamic interaction between the higher-order association cortices and the unimodal sensorimotor areas. This is one way to distinguish REM sleep from other states of consciousness and other states of sleep.

And what happens during REM sleep beside the eye movements? What is the purpose of REM sleep? It normalizes brain chemistry and helps new memories form; it reduces or eliminates negative associations and begins to strengthen adaptive positive associations. This shift happens right before the therapist’s eyes. It is not something that happens over time. This shift usually occurs during every EMDR processing session. The therapist can hear and see the negative starting point shift to the more positive and adaptive aspect. The therapist says nothing to cause this. EMDR happens in the clients own head, in their own words. Strange but during EMDR there is not talking.

The eye movements of EMDR mimic that of REM. EMDR eye movements make use of a mechanism of REM to assist in accessing and processing specific memories.

In REM the memories process naturally. In EMDR, the memories are carefully chosen for processing. Thus, EMDR allows specific unprocessed memories to be processed in a controlled and safe manner.

Eye Movements of EMDR: Durable as an Element of Treatment

Of course, new understanding concerning REM, EMDR, and how these works continue to emerge. More recently brain scans are showing incredible normalization of brain functioning post EMDR treatment. What researchers have found on both REM and EMDR shed new light that has evolved the knowledge of them since Shapiro first introduced the functioning of hypotheses which we now know as EMDR. The findings support the validity of EMDR – with its eye movements – by demonstrating how and why it works. Also, later research shows bi-lateral stimulation can be tactile or auditory with the same positive effect. So eye movements are not necessary which is good. The stimulation occurs who get migraines or have seizures where eye movements can activate such issues. Tapping or auditory bilateral beeps provided electronically avoid such risks with those with these type of diagnoses.

EMDR is a homework-free, drug-free, faster way to help clients heal the emotions of past hurts. It’s not some “quick fix’, though it’s fast-acting and seriously potent. It’s a treatment that produces positive results in less time because it works. EMDR heals at the speed of thought because there is no talking during the process.

Find Us On Social

This Site Is Protected By
Shield Security →